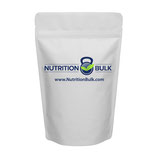 *Need more than 20 lb's? Contact Us directly for a quote.

Glycine (L-Glycine) is a nonessential Amino Acid that is used by the liver to aid in the body's elimination of some toxic substances, and in the formation of bile salts. Glycine is also an important precursor to the release of energy.

Glycine is an important lead-in for many of the body's substances, including DNA, creatine, protein, collagen and phospholipids.

Glycine is necessary for central nervous system functioning and is an inhibitory neurotransmitter.

Independent studies have shown an increase in strength after Glycine ingestion, which may due to its affects on the elevation of human growth hormone (HGH). Glycine intake has also been correlated with an increase in the body's creatine levels.

Too much Glycine can cause fatigue, but the proper amount can greatly increase energy.

A standard dosage of Glycine is 3-7 grams per day. It is generally taken in powder form, via capsule or mixed into a beverage.

•Store in a cool, dry location away from direct sunlight.

*These statements have not been evaluated by the FDA.

*This product is not intended to diagnose, treat, cure or prevent any disease.

Warning: Consult your physician before use.

Keep out of reach of children.