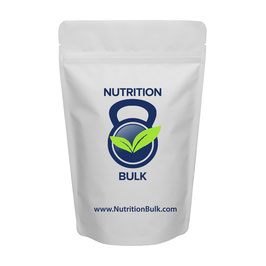 *Need more than 20 lb's? Contact Us directly for a quote.

Creatine is found naturally in the bodies of humans and all other vertebrae animals, and is essential to life. Creatine is vital to the transport of energy within our cells and many view creatine as a sort of “reserve fuel” for our daily anaerobic exercises. Athletes and bodybuilders have commonly taken creatine to safely and effectively raise the creatine content of their muscles and improve their overall performance.

Creatine has also shown to be important in the workings of many other types of tissue in the brain and body, and there is good reason to believe it may be effective as a simple dietary supplement for the treatment of conditions such as Parkinson’s disease, muscular dystrophy, and aging. There is even preliminary evidence that creatine may help in treating depression and in protecting against illness through its antioxidant properties.

As a rule, most people synthesize about half of their daily creatine requirement within their own bodies, and the rest of our creatine has to come directly from food. Since meat and fish are the only major dietary sources of creatine, vegetarians generally have lower creatine levels than those of meat-eaters. Additionally, those who do not eat a balanced diet, including many elderly people, may also have low levels of creatine.

•Store in a cool, dry location away from direct sunlight.

*These statements have not been evaluated by the FDA.

*This product is not intended to diagnose, treat, cure or prevent any disease.

Warning: Consult your physician before use.

Keep out of reach of children.

Good price and this brand happens to be one that I trust. Physician also recommended it to me as it's very safe to take every day. No kidding. Very happy with packaging and customer service. This helps build muscle and with athletic performance.

My husband uses the Creatine powder before a weightlifting workout. It's naturally found in the human body and increases muscle mass while increasing performance. The recommended amount is 1- 2 teaspoons so this powder will last awhile. It dissolved easily in water when my husband used his mixing bottle. He did not complain about a bad flavor. It can also be mixed with juice or even a smoothie.